My friends and fellow conservatives, this commentary on the election results has apparently been long overdue, since Nov. 9th—the day after the general election.  However, various developments have prompted me to postpone it for fear of publishing it prematurely.  After all, what if Green Party presidential candidate Jill Stein was correct about voter fraud, or the Russians influenced the presidential election, or that some of the electoral college members will change their vote on Dec. 19th?  Regardless of such prospects, I have finally decided to publish my commentary.

To the astonishment of leading pollsters and political commentators as Dr. Charles Krauthammer, Trump even won electoral votes in Pennsylvania, Wisconsin, Iowa, Florida, Ohio, and Michigan—states which voted for Pres. Obama in 2008 and 2012.  Incidentally, it is the first time a Republican has won Wisconsin since 1984 and Pennsylvania and Michigan since 1988.  The Michigan contest was the closest race in the state’s history with Trump’s count at 2,279,543 votes and Clinton’s tally at 2,268,839 votes.  Such unlikely wins occurred, in spite of overwhelming odds and opposition from the Republican establishment, Democrat establishment, mainstream media establishment, and the short-sighted #NeverTrump conservatives.   Indeed, this has been, as Fox News anchor Bret Baier accurately described “the most unreal, surreal election we have ever seen.”

To my astonishment, not only did Trump win the presidential election, but Republicans have retained power in both chambers of Congress which essentially establishes a national Republican trifecta.  In the Senate, Republicans have 52 seats, while Democrats have 48.  The House of Representatives is comprised of 241 Republicans and 194 Democrats.  That essentially means the GOP will control all three branches of government, including the Supreme Court, whenever Trump fills the late Justice Antonin Scalia’s seat and replaces retiring justices with conservatives.

GOP victories extended to the state legislatures and governorships as well, just as during the 2014 midterm elections, which I wrote about in “Another Big Blow to Obama’s Tyranny.”  As a result of nearly 6,000 legislative races, Republicans dominate 66 out of 98 chambers.  They control both chambers in 33 states and hold 33 governorships.  Finally, at least 25 states have Republican trifectas, while Democrats have only retained 5 trifectas (namely, California, Deleware, Oregon, Hawaii, and Rhode Island). 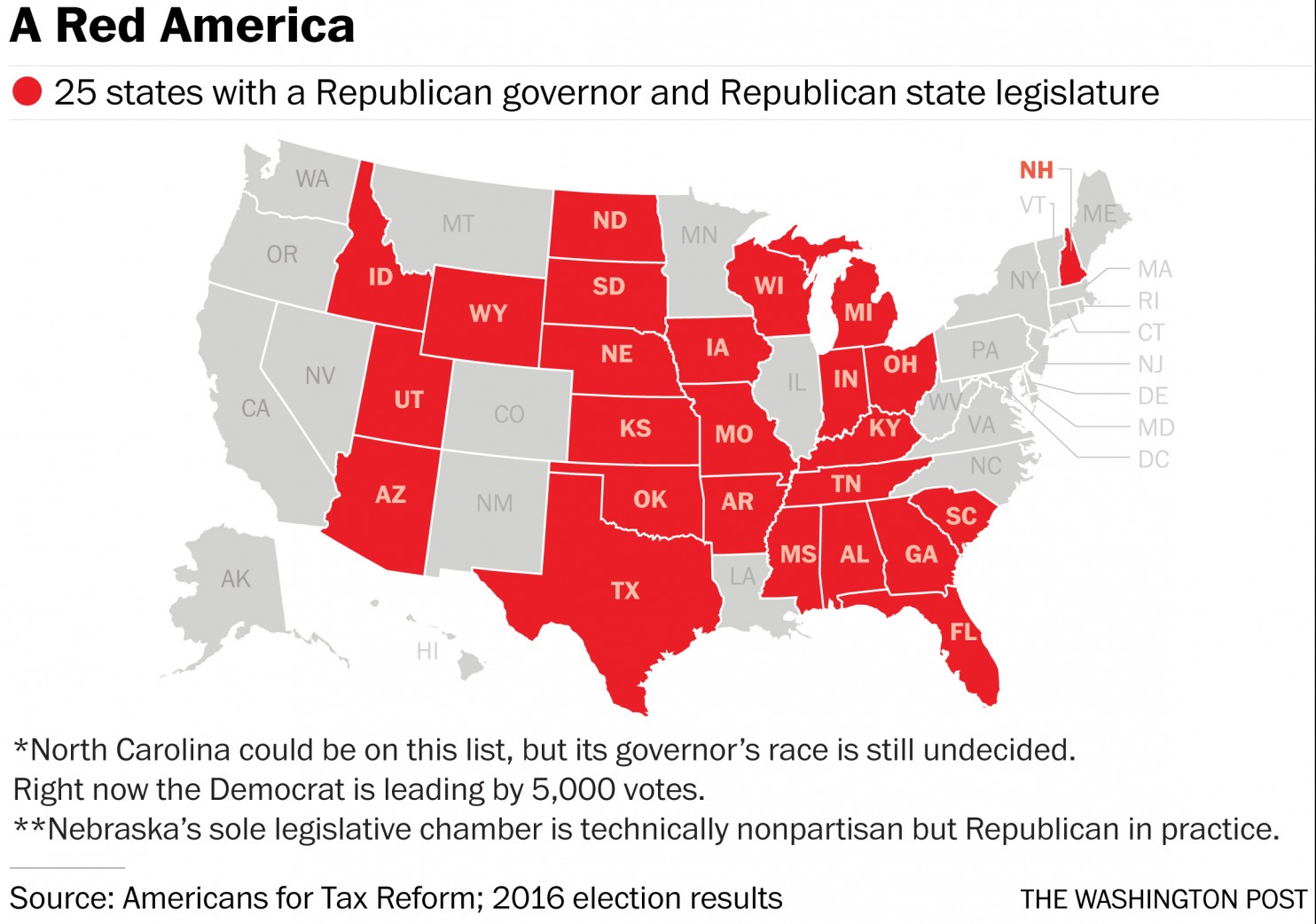 In Kentucky, the GOP increased their state house membership to 64 (from 47, out of 100) which has been controlled by Democrats since 1921.  That puts 30 legislative chambers in the South in Republican hands for the first time in American history.  Iowa’s state senate was won by Republicans, putting them in control of both chambers.  Wisconsin’s Republican state legislative majority is the largest since the 1970s.

Phil Scott won the Republican governorship in Bernie Sanders’s home state of Vermont, which puts a check on its Democrat-controlled legislature.  In Indiana, Eric Holcomb defeated Democrat John Gregg, which will preserve the state’s 12 year lineage of Republican governors.  Before the race, the former was nominated to replace Mike Pence during his vice presidential run with Trump.  Republican and former Navy SEAL Eric Greitens beat Democrat Chris Koster in Missouri’s gubernatorial race, making him the state’s second Republican governor in the past 24 years.

In order to continue this momentum of GOP dominance on every level of government, I have a few suggestions to offer Trump and his team.  Notwithstanding his primary issues of border security and Obamacare, Trump must prioritize aiding the blacks (many of which are disgruntled Democrats) who voted for him.  Since he garnered more black votes than John McCain in 2008 and Mitt Romney in 2012, he has an excellent opportunity to start flipping the blacks, just as Pres. Lyndon B. Johnson began goading them into swelling the ranks of the Democrat Party in the 1960s.  The only difference is that instead of appeasing them with a pittance, “just enough to quiet them down, not enough to make a difference” in order “to have them niggers voting Democratic for the next two hundred years” (as Johnson so blatantly put it), Trump will provide them with opportunities for a bright future via diverse educational options (public, private, charter, magnet, home schooling, etc.) and job and career options, especially for those who reside in the inner cities.

Since many black church leaders advocate family values aligned with the GOP (e.g., the right to life as opposed to abortion and traditional marriage), Trump must launch a massive outreach campaign to establish a dialogue with them as well as others in the black community.  His meeting with black role models as former football stars Jim Brown and Ray Lewis and musician Kanye West to discuss gang violence, education, and jobs was a good start.  Such a move can eventually undermine the agenda of the race hustlers like Rev. Al Sharpton, Rev. Jessie Jackson, and Rev. Jeremiah Wright., who have profited from the racially-based entitlement and grievance industry they help perpetuate.

Trump must also expand the Republican base by welcoming his blue collar voters (over 1 million of which are Democrats) to the “big tent”, just as Pres. Ronald Reagan did in the 1980s.  However, he must refrain from his populist, protectionist rhetoric, and simply emphasize regulatory and tax reform as an incentive to dissuade businesses from outsourcing, at least on such a grand scale.  It is a fact of economics that some outsourcing or automation (the primary cause of worker displacement) is essential to streamline the production process, which, in turn, will keep the price of goods low for American consumers, thereby increasing demand and output, which will create new jobs.  It is the principle of what free market economists call “creative destruction” at work.  For that reason, Trump should encourage displaced blue collar workers to either learn new skills or acquire knowledge calibrated to the predominant service and knowledge sectors of the economy.

Alternatively, many blue collar workers have become successful entrepreneurs either by starting their own businesses or by inventing products or services, which have allowed them to resign from their jobs or professions.  You can easily view them on TV shows as Shark Tank or Blue Collar Millionaires.  Indeed, such entrepreneurs and small business owners are the backbone of the American economy, which is why Trump should acknowledge them as successful examples of the free market system, rather than focusing so much on retrieving outsourced manufacturing jobs for big companies.

That is more practical and realistic than threatening companies with punitive taxes (namely, a 35% tariff) for outsourcing or subsidizing them in exchange for retaining their plants in the U.S., an arrangement which Gov. Sarah Palin says reeks of “special interest crony capitalism” as was possibly the case with Carrier.  Incidentally, Mark Levin (constitutional scholar and former advisor to Cabinet members under Reagan) questions the constitutionality of “specifically targeting (or favoring) one business and possibly threatening that business, should they leave the country.”   Meanwhile the Wall Street Journal editorial board criticizes it as “a mercantilist Trump trade policy” in which the Carrier CEO Gregory Hayes was “made an offer he couldn’t refuse.”

Anyway, after scaling back on regulations and reducing taxes for businesses and the working class, many jobs will be preserved.  Others will be created as a result of outsourcing and automation, and many jobs will yet be created from the ingenuity of blue collar inventors, who will use their entrepreneurial skills or knowledge to form their own companies and employ others.  Afterwards, Trump can rightfully take credit for a booming economy while winning over much of the blue collar Democrats.  Although he has 4 years (or 8 if re-elected in 2020), Trump should set the deadline at 2 years after his inauguration in order to steer the 2018 midterm elections in the GOP’s favor.

Aside from what Trump and his administration must do, conservative voters must hold him, as well as other elected officials, accountable.  That includes all the national and local legislators and governors.  While it may be argued that many of these newly elected Republicans simply rode Trump’s populist movement into victory, we must see to it that this powerful force eventually converts into the conservative movement whose end aligns with the vision of America’s founding fathers and the restoration of constitutionally limited government.

For that reason, I advocate a mass, nationwide campaign to educate citizens on America’s constitutional history and its relevance today.  In an age wherein the uninformed youth are easily mesmerized by the socialist rhetoric of Sen. Bernie Sanders or the populist rhetoric of Trump, constitutional literacy is the appropriate and perennial remedy.  Indeed, Sen. Ted Cruz emphasizes this:

It’s easy to talk about making America great again.  You can even print that on a baseball cap.  But the critical question is, do you understand the principles and values that made America great in the first place?

Hillsdale College offers a free online course on constitutional studies, which is certain to impart such principles and values to anyone taking it.

Another effective thing conservatives can do to preserve and expand the GOP majority is become active in local politics.  Whether by attending townhall meetings with the Tea Party, signing petitions, registering citizens to vote, running to be a precinct captain, or simply sharing conservative content on the social networks (like Facebook or Twitter), one can have a positive impact on a collective scale.  American Majority is a conservative organization which trains activists in all these things.

My friends and fellow conservatives, in closing, I would like to express my appreciation to everyone who contributed to this turning point in the election of Donald Trump.  That includes all pragmatic Cruz conservatives, blue collar Democrats, and former political rivals.  I wish I could extend my gratitude and praise to the #NeverTrump conservatives with whom I endeavored to persuade in my previous commentary.  Perhaps they will all eventually have a change of heart as it will soon be “morning again in America”—not because of Trump’s short-lived wave of populism, but because of the time-tested constitutional principles, which conservatives will revitalize within the party of Reagan and throughout the country.

Update: As of December 19—the day in which the electoral college members cast their votes for the final time—seven altered their vote. In Texas, one elector voted for Ohio Gov. John Kasich, while another from Texas voted for former Texas House Rep. Ron Paul. In Washington state, three Democrat electors cast their votes for former state secretary Colin Powell and one voted for Sioux tribe leader Faith Spotted Eagle. A Democrat elector in Hawaii voted for Bernie Sanders. Three other “faithless” electors from Maine, Minnesota, and Colorado had their votes barred. That puts the final electoral tally for Clinton at 228 and 304 for Trump.