My friends, “if it looks like a duck, swims like a duck, and quacks like a duck, it’s probably a duck.”  Not only has Donald Trump absolved himself from attending two important events, he said he would not participate in the next FNC debate as well.  All three events are significant, since they allow his potential voters and supporters to scrutinize his record, policies, and vision for America more closely.  Therefore, Trump’s pattern of absence from these events looks precisely like a “duck”—a hypocritical position since he has criticized Sen. Marco Rubio for his excessive absences in the Senate.

In my commentary titled “Why Evangelicals and Conservatives Should Cruz with the Best and Trump the Rest…including the Donald,” I criticized Trump for evading the Iowa debate just before its caucuses.  He claimed that debate moderator Megyn Kelly was unfair to him in the previous FNC debate, and that he committed to a veteran fundraising event instead (which he said was more important).  As a result, presidential candidate Sen. Ted Cruz challenged Trump to a 90-minute, one on one debate for which the former’s team would donate $1.5 million to veterans.  As an alternative to Kelly, Cruz stated, “We can arrange for Mark Levin to moderate, or Sean Hannity to moderate or Rush Limbaugh to moderate or Glen Beck to moderate.”   That would seem to be a win-win situation for Cruz, Trump, Iowa voters, and the veterans.  However, Trump declined Cruz’s challenge.  (I hear a duck quacking.)

In my commentary titled “Are Trump Conservatives Irrational?,” I mentioned that Trump did not attend the Conservative Political Action Conference (CPAC) in spite of being one of the first to accept the invitation.  According to its organizer, Matt Schlapp, Trump disliked the new question and answer format of the event, which was formerly a speech format.  As a result of CPAC’s refusal to capitulate to Trump’s terms, he campaigned in Kansas and Florida instead.  (I heard a duck quacking again.)

Again Trump has decided to forgo the FNC debate scheduled March 21 in order to speak at the pro-Jewish American Israel Public Affairs Committee (AIPAC).  “I thought the last debate on CNN was the last debate, that was going to be it.  Nobody told me there were going to be more debates,” stated Trump, “I think we’ve had enough debates.”  Apparently Trump does not want to debate Cruz due to his poor performance in the last two debates.  Ironically, Trump did declare on March 6, “I would love to take on Ted one-on-one.”  (That is the third quack I heard.  Perhaps it is more accurate to say that a “quack” has “ducked” three times.)

On March 22, 2016 Cruz appeared on the O’ Reilly Factor, challenging Trump again to a one on one debate.  However, he has chosen the feisty but fair Bill O’ Reilly to moderate this time.  Trump may have a big penis, as he boasted in a GOP debate, but does he have big proverbial testicles to meet Cruz’s challenge?  Perhaps it was his scheme all along to attack Cruz’s wife on Twitter in order to distract his potential voters from the debate challenge.  After all, they both occurred on the same day. 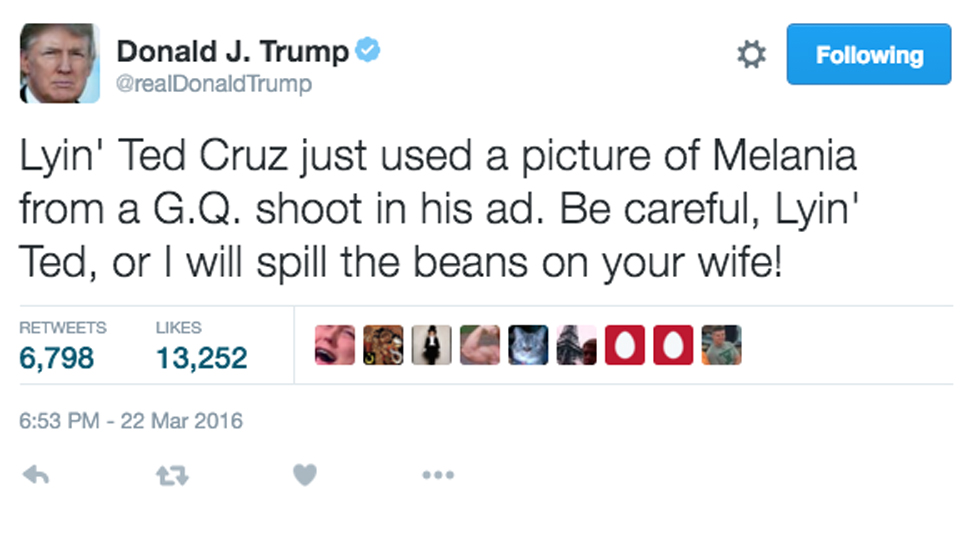 Aside from another potential debate, why would Trump skip all three of the aforementioned important events?  Is it purely coincidental?  Could that have been his strategic plan in order to evade the informed conservatives—the ones who are well read and actually view and scrutinize the debates down to their minutia?  Cruz spokesman Ron Nehring concludes:

Perhaps Mr. Trump is unable to speak for more than one minute about any given topic because of his shallow understanding of basic policies, or perhaps he is scared of voters learning the truth—that he has spent his entire adult life promoting liberal positions completely opposite of the conservative platform that he has campaigned on.

If Nehring is correct, that puts into question Trump’s capacity to lead the country and confront America’s enemies.  Trump himself has admitted that he has never encountered so much pressure as he has in campaigning.  How much worse will it be once he starts governing as president?  Would this not be a grave risk for the American people as well as the world just as the election of Pres. Barack Obama was?

Fortunately, there is an alternative candidate who is a constitutional conservative and already has a proven record of defending life, religious liberty, gun rights, state sovereignty, and the free market system.  His iron political will has made him impervious to the pressures of standing up to his own party in defense of fulfilling his campaign promises before the Senate and defending the Constitution before the Supreme Court.  In conclusion, my friends, Trump the Donald and Cruz with Ted.

Victory to Sen. Ted Cruz for God and Country!