Such safeguards are not only what starkly differentiate the U.S. government from the Philippine government, but they are precisely what account for the general effectiveness of the former’s system of checks and balances—namely, a federalist system by which power is equally divided by a central government and the states, an electoral college to elect the president, a Senate with its members elected by their districts rather than at large, and recourse for the states whenever their sovereignty is threatened by a tyrannical federal government.  Due to much of the public’s oblivion to these distinctions, I have elucidated them in my commentary entitled “Is the Philippine Government an American Replica?”

First, I propose the restructuring of the Philippine Senate pursuant to the American model of equal regional representation, whereby each region or state will elect two senators.  Indeed, this is a drastic deviation of the current method of the populace voting for twenty-four senators nationwide or at large.  Not only would this arrangement be congenial to the unique situation of each region or state, it would empower the small states as well.  Indeed, as American founder William Davie stated, “The protection of the small states against the ambition and influence of the larger members, could only be effected by arming them with an equal power in one branch of the legislature.”  Hence, equal representation in the Senate is a safeguard against what American founder James Madison called “the tyranny of the majority.”

Since the lower chamber of Congress known as the House of Representatives is composed of members elected directly by the people, it has been characterized as embodying the unfettered “passions” of the people.  By contrast, members of the upper house known as the Senate shall be elected or appointed by the regional or state legislatures, whose members are inclined to be refined and informed.  That is why Madison wrote, “The use of the Senate is to consist in its proceedings with more coolness, with more system and with more wisdom, than the popular branch.”  Put more simply by American founder George Washington, the scalding heat of the “tea” of the House is placed into the “senatorial saucer to cool it.”

Additionally, the election or appointment of senators by regional or state legislatures will decrease the influence of special interest groups on senatoriables, since they often fund costly state-wide races.  Political commentator John DeMaggio elaborates:

Hence, the republican nature of the Senate serves as a check and balance on the democratic nature of the House, a distinct feature of American federalism, which ultimately keeps an overreaching federal government at bay.

Second, I propose the establishment of an electoral college (EC) to elect the president as opposed to the current form of direct or popular election.  Being comprised of what American founder John Jay characterizes as “the most enlightened and respectable citizens. . . their votes will be directed to those men only who have become the most distinguished by their abilities and virtue. . . As an assembly of select electors possess. . . the means of extensive and accurate information relative to men and characters, so will their appointments bear at least equal marks of discretion and discernment . . .”

By contrast, the current presidential electoral system via popular vote is often dominated by man’s raw passion and impulse (as in the House) because as American founder Elbridge Gerry stressed, the “people are uninformed, and would be misled by a few designing men.”  Perhaps that accounts for the banal election of incompetent politicians, unfavorable dynasties, and inexperienced celebrities in the Philippines.  Hence, the EC, much as the Senate, serves as a check and safeguard against the populace’s unfettered passion and impulsive drive.

The EC also serves to ensure fair representation for the small and least populated regions or states just as it does in the U.S. Senate.  Consider that of the seventeen regions, the two most populous ones are Southern Tagalog (Region IV) at 14,414,774 and the National Capital Region (Region XIII) at 12,877,253.  Naturally, a direct election of the president would be largely in their favor to the detriment of the less populous regions, such as the Cordillera (Region XIV) at 1,722,006 or Caraga (Region XVI) at 2,596,709.

That is why I propose, in addition to the equivalent number of House members, two representatives be elected or appointed by each region or state in order to constitute a Philippine electoral college (EC) similar to the U.S., whereby each region will be equally represented, regardless of its size.  In so doing, the president will be the president of the whole Philippines, not just of the largest regions or metropolitan areas.

The final purpose of the EC is to facilitate the preclusion of voter fraud.  However, in order for this to be effective, the presidential electoral system must become decentralized.  Just as in the U.S., each individual state legislates its own election laws, each Philippine region or state must do likewise.  In so doing, corrupt federal election officials would find it virtually impossible to fix or “rig” the presidential election due to the electoral autonomy of every region or state and the functioning of local election judges, tasked with multiple responsibilities.

Even when anomalies are discovered after the voting results, they can easily be isolated to one or only a few regions or states, which would make for speedy recounts, as was the case in the 2000 U.S. presidential election wherein a voting dispute occurred between George W. Bush and Al Gore in Florida for only a few weeks.  Contrast that with the dispute between Ferdinand “Bongbong” Marcos and Leni Robredo which has persisted for over two years.  Consider also how cost-effective the electoral process would be due to decentralization and curtailing of lawsuits.

The electors shall not hold public office in any branch of the federal government, be given a salary, or have tenure, and whereupon its sole function of electing the president and vice-president is executed, the EC shall immediately be dissolved.  Hence, they will be insulated from national political pressure.  Such a temporary function certainly addresses American founder Alexander Hamilton’s concern that presidential selection should not “depend on any preexisting bodies of men who might be tampered with beforehand to prostitute their votes.”  The manner by which electors are selected shall be at the sole discretion of each individual state or region—e.g., via a state or region’s legislature, via a state or region’s governor on the authority of that state or region’s legislature.

It is ostensible that the EC has a positive impact and wide implications on governance.  Such a significant feature, with all its safeguards, is the cornerstone of American federalism, of which the Philippine government is bereft.  Indeed, the EC is also an alternative to a direct democracy (as is currently the case), authoritarianism, and parliamentary government.

Third, America’s founders brilliantly concocted two checks as a remedy for the states to counter an overreaching or tyrannical national government.  The remedies are state nullification of unconstitutional federal laws and an Article V Convention of States (COS).  The former is, according to Jefferson, “the rightful remedy” against “all unauthorized acts done” by the national government and was executed effectively in defiance of a federal embargo, the Alien and Sedition Acts, and the Fugitive Slave Act of 1850.  In my commentary entitled The Peak of Tyranny and End of Its Destruction, I cited two more recent examples in which Montana, Alabama, and Wyoming amended their state constitutions, nullifying Obamacare.

In defiance to President Barack Obama’s executive orders to banning certain types of firearms, several governors, state legislators, and sheriffs have taken measures to quell or nullify any presidential decree, which did not conform to their own state’s gun regulations.  Some legislators have gone so far as to prepare legislation which would criminalize any attempt of federal agents to enforce the new federal gun ownership restrictions.  One sheriff in Oregon (Tim Mueller) even wrote a letter to Vice President Joe Biden in which he declared that neither he nor his deputies would enforce any federal gun law, which he deems unconstitutional.  Among the states which exercised such recalcitrant acts were Mississippi, Kentucky, Oregon, Minnesota, Alabama, Tennessee, Wyoming, Utah, Alaska, Florida, and Texas.

In Federalist 85, Hamilton alludes to the second remedy when he says, “. . . we may safely rely on the disposition of the state legislatures to erect barriers against the encroachments of the national authority.”  He is referring to assembling a Convention of States (COS), which is actually embodied in Article V of the U.S. Constitution:

The Congress, whenever two thirds of both Houses shall deem it necessary, shall propose Amendments to this Constitution, or, on the Application of the Legislatures of two thirds of the several States, shall call a Convention for proposing Amendments, which, in either Case, shall be valid to all Intents and Purposes, as Part of this Constitution, when ratified by the Legislatures of three fourths of the several States, or by Conventions in three fourths thereof, as the one or the other Mode of Ratification may be proposed by the Congress ….

Put plainly and simply, thirty-four states of the U.S. must consent to deliberation in a convention of states (not a constitutional convention, which would be a formidable option) to propose constitutional amendments.  Thirty-eight states must ratify the amendments in order for them to become binding and effective.  In this way, the states can put the national government in check regardless of who occupies the presidency, Congress, or the Supreme Court.  As of this writing, twelve states have passed a COS resolution.  Furthermore, the aforementioned remedies as state nullification and an Article V COS are essential in lawfully preserving federalism, while precluding “mob rule.” 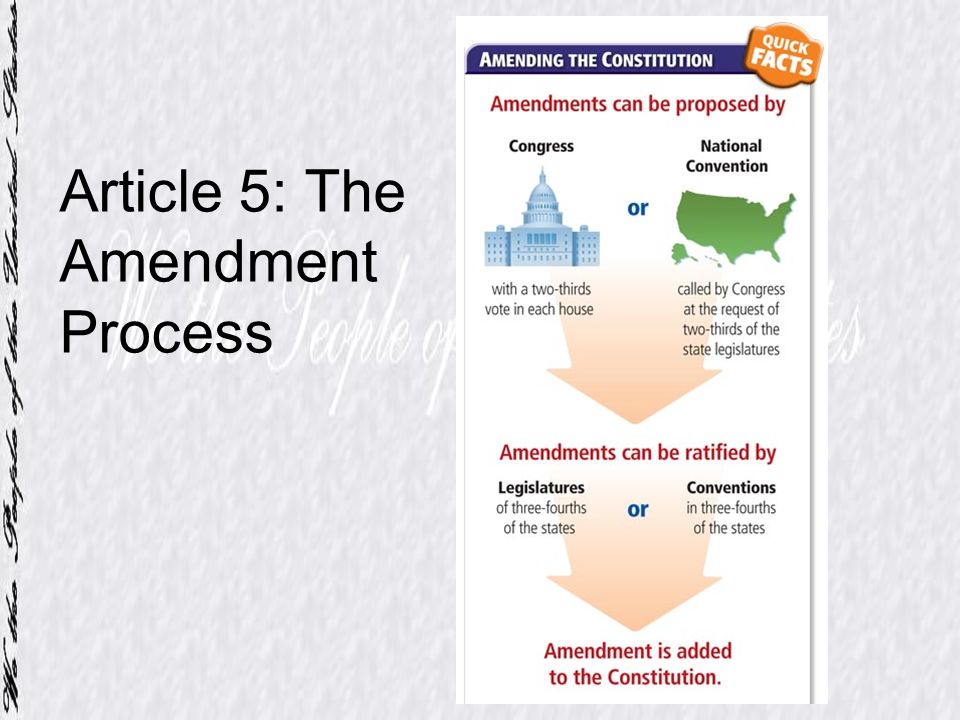 Article 5: The Amendment Process in the U.S.

In the Philippine context, a clause pertinent to regional or state nullification of intrusive federal laws can and should be annexed to the draft constitution in order to preclude jurisdictional discrepancies, wherein both the regions and national government purport to defend and uphold the Constitution.  Unfortunately, such a clause is nonexistent in the U.S. Constitution, which has been the cause for the aforementioned discrepancies and can thus serve as an example of unintended consequences from which the Philippines can learn.  In terms of annexing a COS clause to the draft constitution, the number of regions needed for deliberation and ratification will be smaller than our U.S. counterpart, since the number of regions created and established via federalism will be significantly smaller than the fifty states of the U.S. (e.g., eleven pursuant to LDP Institute’s model and eighteen pursuant to RBH 8).

Furthermore, a Senate elected by the regions or states, an electoral college to elect the President, and recourse for the regions or states against an overreaching federal government are checks and balances safeguarding the sovereignty of the regions or states and the people.  They are elements, which, in spite of their historical significance to American federalism, have never been assimilated into Philippine government.  Perhaps now is the time in the clamor for federalism and as an alternative to a costly and more drastic shift to a federal parliamentary system.

However, in spite of the ostensible advantages of my federalist proposal, it must be noted that it is not a “magic bullet” or the single, perfect solution to everything ailing the Philippines.  Rather it is a remedy to address certain issues, which, in order to have maximum positive impact, must be executed in concert with other measures, e.g., the enforcement of current laws, economic liberalization to curb protectionist policies and attract direct foreign investments, and cultural changes in order to cultivate an informed, disciplined, industrious, and active citizenry which will strengthen preexisting, fundamental, social institutions.  The latter is imperative, lest the electorate continues to elect incompetent or corrupt politicians, and that will occur under any system of governance—unitary or federal, presidential or parliamentary.

5 thoughts on “A Federal Philippines: A Modest Proposal”